100 Years Since the Pontian Genocide

It has been 100 years since the Pontian Genocide, and Pontic Greeks remember May 19 as a black day each and every year.

It has been 100 years since the Pontian Genocide, and Pontic Greeks remember May 19 as a black day each and every year. At the same time, it is a date used to strengthen the bonds between them all across the world.

Pontic Greeks are Diaspora people, spread all over the globe, but they are tied together by their traditions, the associations they have formed in many countries and, more importantly, by their deep Orthodox faith.

The roots of Pontic Greeks

The first recorded Greek colony in the area of the Black Sea (Pontus) was established in Sinope around the year 800 BC. It is known that the first Pontic Greeks to colonize the area were merchants from the Ionian Greek city-state of Miletus. Before the time of the settlement, the Black Sea had been referred to as “Axeinos Pontos” (“Inhospitable Sea”). After the settlement, the name was changed to the exact opposite, “Euxeinos Pontos” (Hospitable Sea). Soon, the Greek settlers established additional colonies along the entire Black Sea coastline in what are today the nations of Turkey, Bulgaria, Georgia, Russia, Ukraine, and Romania. Pontus flourished greatly during the Byzantine era. It was the birthplace of the Komnenos dynasty, which ruled the Byzantine Empire from 1082 to 1185, a time when the empire recovered much of Anatolia from the Seljuk Turks. In the aftermath of the fall of Constantinople to the Crusaders during the Fourth Crusade in 1204, the “Empire of Trebizond” was established by Alexios I of Trebizond, a descendant of Alexios I Komnenos, the patriarch of the Komnenos dynasty. Pontus was in effect the last bastion of the Byzantine Empire. Even though Constantinople and the rest of the empire fell at the hands of the Ottomans, it took them eighteen more years to finally defeat the Greek resistance in Pontus. During this long period of resistance, many Pontic Greek nobles and aristocrats married foreign emperors and into royal dynasties, most notably those of medieval Russia, medieval Georgia, and the Safavid Persian dynasty. Pontians also migrated to what is now southern Russia and the Caucasus.

Pontians flourish in the 19th century

Like many mountain people, Pontic Greeks moved a great deal, but in their case they tended to go in the direction of the Caucasus and Russia. By the mid-nineteenth century, the numbers of Greeks in Pontus had grown a great deal, and this was reflected in their economic power. In 1865, there were 265,000 Pontians — but by 1880 their number had exploded to 330,000. When the Russian empire extended its territory to the south, particularly into the Caucasus, it pushed back the Muslim populations and attracted Christian populations to resettle the lands. The settlement of the Pontic Greeks was encouraged in the valleys of the Caucasus to the south of Tbilisi, as well as in the steppe region of Kars-Ardahan, on the Armenian plateau of the Anti-Caucasus. In the early twentieth century, their number had neared 700,000. In the year 1860, there were one hundred schools in Pontus, along with printing businesses, newspapers, magazines, clubs and theaters. The Trebizond region had one of the highest literacy rates in the Ottoman Empire. Pontians also displayed great entrepreneurial skills, making then excellent merchants. Although the majority of people were farmers, Pontic Greeks had a well-educated, cosmopolitan middle class. 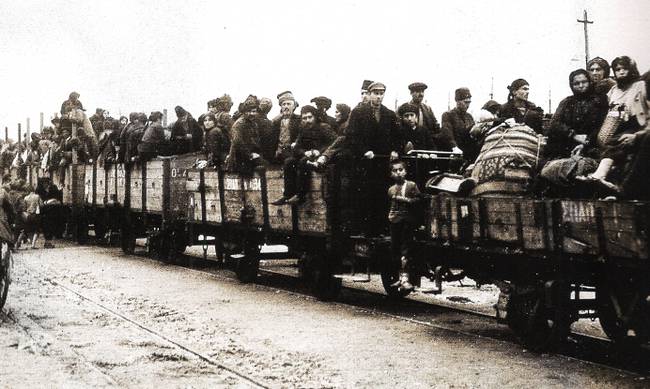 The year 1908 was a milestone for the peoples of the dying Ottoman Empire. It was the year of the Young Turk movement, the ultranationalist party which launched the beginning of the persecution of Christian communities and the Turkification of the region. Using the pretext of national security, accusing the Pontians and Armenians of collaborating with, or fighting on the side of the Russians, the Turks began to persecute the Greek population, which ultimately led to their genocide. First, the Turks began by displacing the majority of the Greek population in Asia Minor’s inhospitable hinterland, via so-called “labor battalions.” The men who did not join the Turkish army were forced to work in quarries, mines and building roads under the harshest possible conditions. Most of the men would soon begin to perish from hunger and disease. Before long, to avoid the depredations of the Turks — which had now included open murders, deportations and the burning of villages — the Pontic Greeks took to the mountains to salvage what was left of their lives.
From 1917–1922, there existed an unrecognized state by the name of “The Republic of Pontus”, which was led by Chrysanthus, the Metropolitan of Trebizond. At the time, Greece and the Entente powers even considered the creation of a Hellenic autonomous state in Pontus, a “Ponto-Armenian Federation.” In 1919, on the fringes of the Paris Peace Conference, Metropolitan Chrysanthus proposed the establishment of a fully independent Republic of Pontus, but neither Greece nor the other delegations supported this. The plan was thwarted by the Turks, who took advantage of this turn of events to advance to their “Final Solution” — which would ultimately mean the massacre of tens of thousands of Pontians.

On May 19, 1919, Ataturk landed in Samsun to begin the second and most brutal phase of the Pontic Genocide under the guidance of German and Soviet advisers. Thousands of Greeks would be slaughtered by the Turkish army — and just as many by irregular bands loyal to Topal Osman. By the time of the Asia Minor Catastrophe of 1922 and including one year later, the number of Pontians who had died exceeded 200,000. It is impossible to arrive at an exact figure, but some historians put the true number at 350,000. 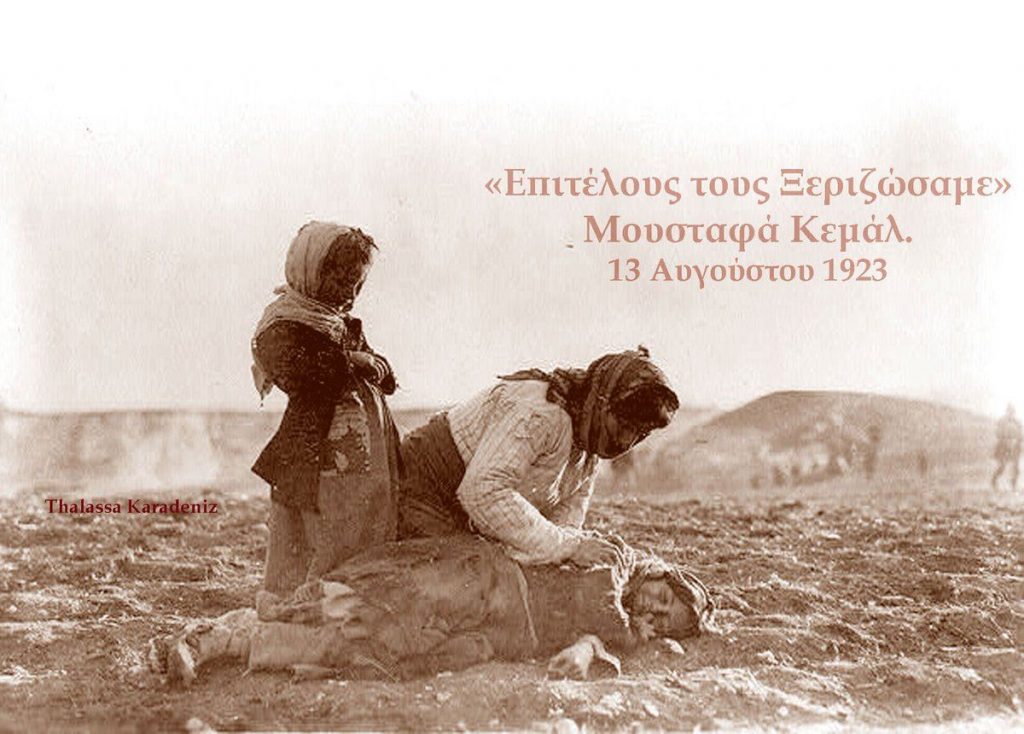 Many ethnic Greeks who had been able to somehow escape the Turkish sword fled as refugees to southern Russia. After the end of the 1919–22 Greco-Turkish War, most of the Pontic Greeks remaining in the Ottoman Empire were transported to Greece under the terms of the population exchange stipulations in the 1923 Treaty of Lausanne between Greece and Turkey. Their number is estimated to be approximately 400,000. The Pontians would settle in Macedonia and Thrace, especially in the prefectures of Thessaloniki, Pella, Kilkis, Florina, Drama and Serres, all regions which at the time were sparsely populated. Most refugees tended to settle in farming areas, with relatively few going to the city of Thessaloniki. This settlement took place once again in a mostly mountainous region in northern Greece, in a Balkan region on the border with the Former Yugoslav republic of Macedonia. These Pontic Greeks, referred to as “Caucasians” by the others, once again found themselves in the situation of acting as pioneers and defenders of the frontiers, in effect replacing the Slavic-speaking populations who had left for Bulgaria at the end of the Balkan Wars.
After World War II, during the 1950s and especially the 1960s, the poverty of the Pontic population in Macedonian villages spurred massive migrations to the major Greek urban centers of Athens and Thessaloniki and to Western Europe. Many Pontic Greeks also ended up in Germany, Belgium, Sweden, Australia, Canada and the U.S. However, unlike earlier migrations, these were purely voluntary, and were undertaken for economic reasons. Surprisingly, following the collapse of the USSR in 1990, families of Russian-speaking Pontic Greeks began migrating back to Greece. Many of them came to settle in the same Macedonian villages in which the Pontic Greeks had first settled, in the hope that they might find distant relatives or compatriots originating from the same Pontic regions. Others migrated directly to the large urban centers where the economy was better.

The rich legacy and iconography of Pontic Greeks

The diaspora Pontic Greeks in Greece, Australia, the United States and Northern Europe continue to remember their mountainous homeland and places of origin in the Pontus through their associations and churches. They do not claim any territory whatsoever as their homeland, but they do ask the Turkish state to recognize the genocide of their ancestors. Pontians throughout the world are united through cultural and religious exchanges via a national and transnational network of associations and ecclesiastical institutions. Hellenism and Orthodoxy are the core of their ethnic identity. Throughout the years, Pontic Greeks have created a rich iconography which serves as an important element which preserves their ethnic identity and transmits it to the next generation. The icon of the Panagia of Soumela is the focal point of Pontic iconography and the ultimate symbol of their unity. This particular holy icon is a symbol which has many facets – it represents not only the Byzantine Empire, but their roots within Pontus and Greek Orthodoxy. An even more important reminder of their history is the stunning Monastery of the Panagia of Soumela, perched on Mount Mela (“Black Mountain”) in Trebizond, today’s Trabzon, in Turkey.

This sanctuary is the meetingplace of a great annual gathering which takes the form of a pilgrimage. Diaspora Pontians from all over the world meet there every year to celebrate their identity, to honor their ancestors, and to ensure that their heritage will be transmitted from one generation to the next. From the 1970s and onward, non-religious elements were also added to the Pontic iconography. The Pontic resistance fighters in their traditional costumes, armed to the teeth with daggers and pistols, dancing a war dance, have become widely recognizable images. The flag — with the eagle facing toward Constantinople — is another addition to Pontic iconography. Striking black and white photographs taken of Pontic Greeks before and during the genocide are also displayed in museums, galleries and Pontic restaurants worldwide.

Today, on the 100th anniversary of the genocide, the aim of all the Pontic associations throughout the world is for every nation to recognize the crime against humanity committed by the Turkish State in the dark years between 1913 and 1922. 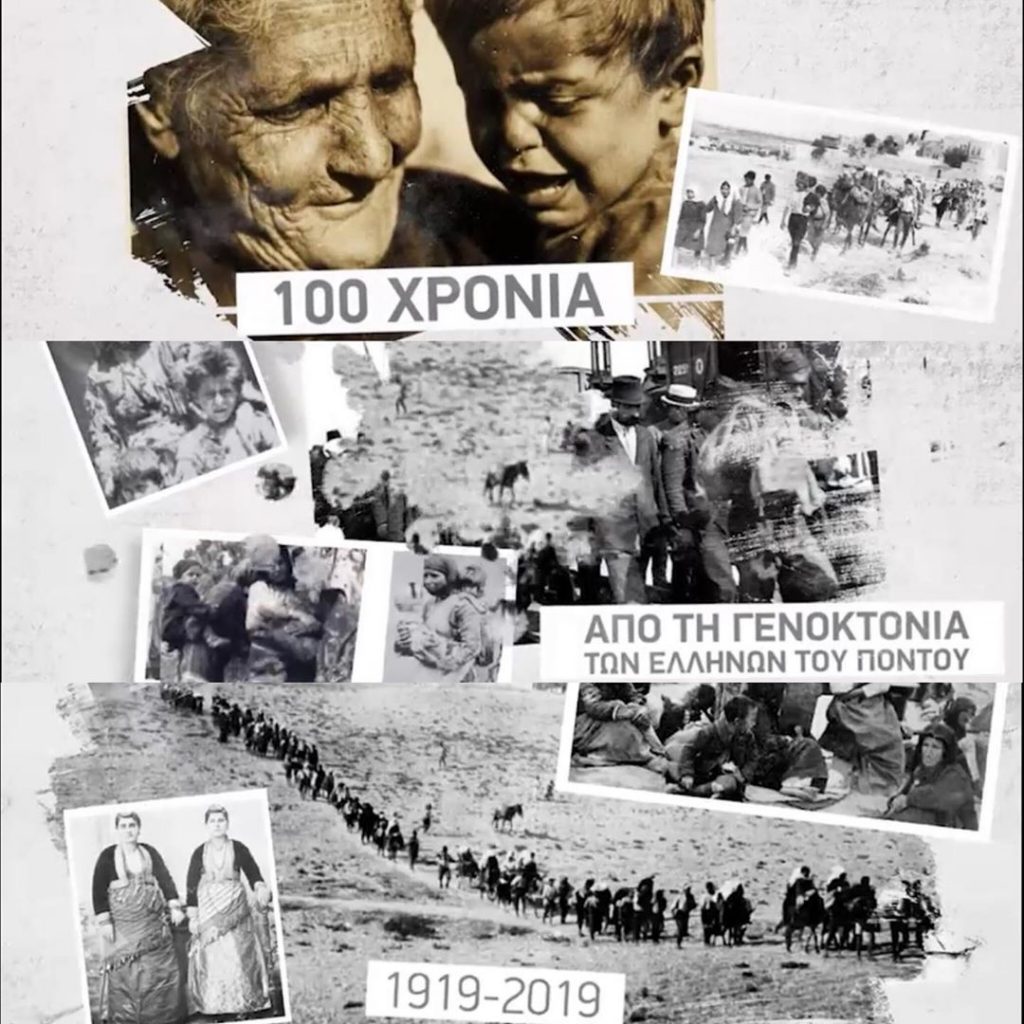